Horizons at Sacred Heart University has much to celebrate during its five-year anniversary. Not only has the enrichment program for Bridgeport youth grown, it has no plans of slowing down.

To commemorate its anniversary, the program is hosting an array of events this year to show that success can be reached and achievement gaps can be diminished with the right tools and support.

Horizons at SHU, in affiliation with Horizons National, already has hosted several events to celebrate its anniversary and successes. The events, which included Horizons’ students and staff collaborating with SHU’s students and faculty, showcased the youngsters’ talents and growth.

“We are thrilled to celebrate the fifth anniversary of Horizons,” said John J. Petillo, president of SHU. “I can remember when Horizons was established here on campus. It was a small program, but it had big goals.

“Horizons has grown so much in five years and has had a huge effect on the children and staff. The program is part of the SHU family now. We love having the kids around and seeing their smiles and determination. Our College of Education students provide tutoring, but we learn more than a thing or two from the children as well. We’re looking forward to participating in a number of celebratory events this year. There’s a lot to be proud of.”

Horizon students built a community garden on campus in March with the nonprofit Green Village Initiative, a group from Bridgeport that works to create change through community gardens. The following month, musicians Bruce Hornsby and the Range performed at a University gala and fundraiser, where Horizons students opened the show with the SHU choir. In May, the program’s National Giving Day celebration raised funds to continue to help the children overcome the education gap and to bring more children into the program.

Throughout the summer, children will participate in a several life-learning events, ranging from reading with Dr. Petillo and step-dancing and cooking with SHU’s dining services’ staff, to doing research with the school’s marine biology class. The fun-filled summer will conclude with a community night packed with entertaining performances by the children.

Horizons at SHU started as a summer program on campus with approximately 30 first- and second-grade students. Its goal was to address summer learning loss , a phenomenon that sees low-income children fall behind in reading and math skills in the summer, while middle-income students keep pace or jump ahead. This contributes to an achievement gap, leaving some low-income children as much as three years behind by fifth grade. The program aimed to have students gain reading and math skills during summer, and they also learned to swim.

This same summer program, which continues to take place on SHU’s campus, has grown to hold nearly 100 children in first through fifth grades. Horizons also offers a Saturday academy in the fall and spring to provide students with continued learning, confidence-building and hands-on activities.

“We are a great national model for achievement and success,” said Jeffrey N. Rumpf, executive director of Horizons at SHU.  “The University is a great place to make social change…there’s tremendous support here, and people are excited about making that change. Everyone here sees what we’re trying to do, and they’re willing to work with the children to help.”

Students from Bridgeport public and Cathedral Education Cluster schools typically attend the program in kindergarten and don’t leave until they graduate high school. Rumpf said the children and their families work together as allies. He attributes the program’s success to this, and to the University’s support. The positive results show up in the children’s gains in math and reading scores, the program’s high retention rates and the students’ success in enrichment programs such as martial arts, swimming, creative arts and golf.

For the community to fully understand and see Horizons’ good work, Rumpf invites people to join in on the upcoming anniversary events. “Whether they attend an event, volunteer or offer their good will, we want to build on that success,” he said.

While so much has been accomplished already, Rumpf has some big goals for the years to come, including increasing program enrollment to 200 students and designing a robust middle- and high-school program.

“We want the kids to know they can achieve their dreams and that they’ll be well prepared to be excellent college students. They’ll have the education and the character to do so,” Rumpf said. 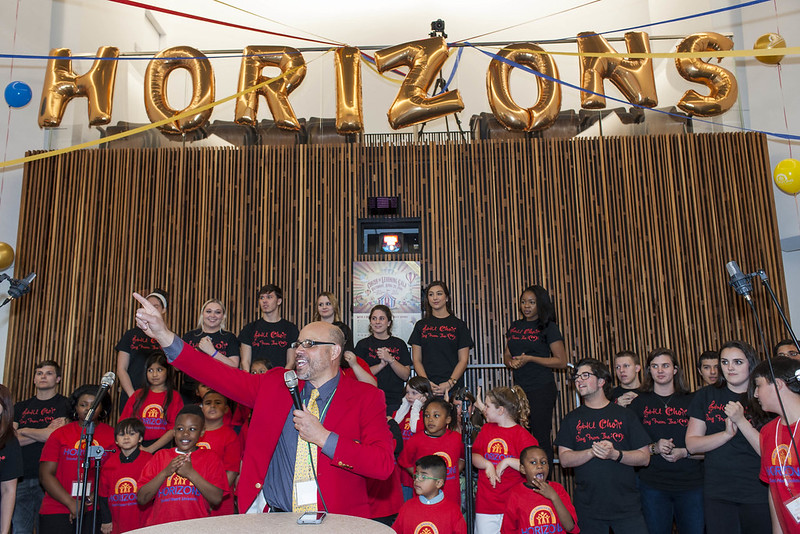